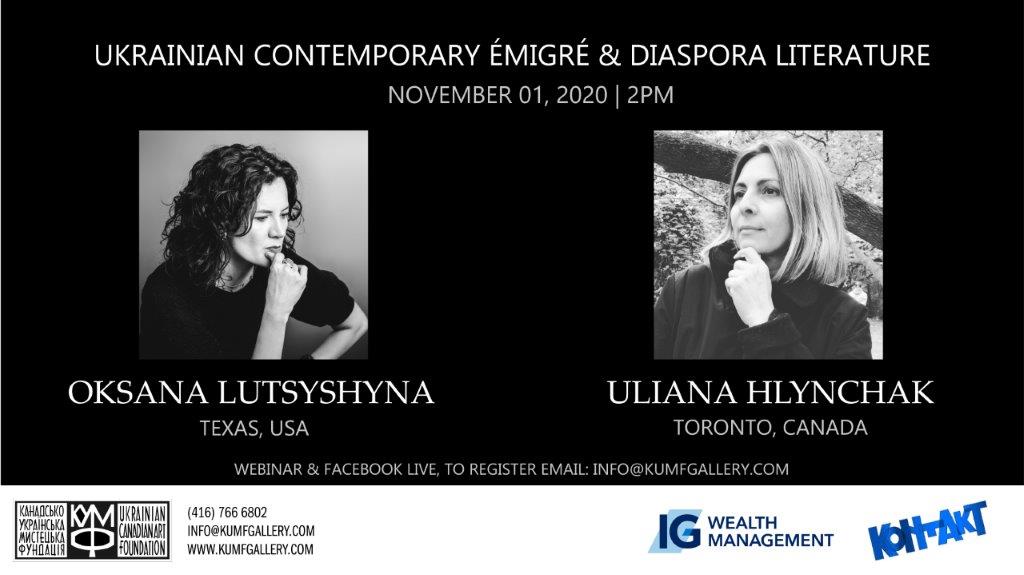 A public reading with Oksana Lutsyshyna, Ukrainian American writer and emerging Ukrainian Canadian writer, Uliana Hlynchak. Introduction by Olga Khometa, Ph.D. Candidate in the Department of Slavic Literatures and Languages at the University of Toronto .Webinar registration at info@kumfgallery.com

Authors bio: Oksana Lutsyshyna is a writer, poet, and literary scholar, author of three novels, collection of short stories, and five books of poetry, most of them in Ukrainian, and the latest published in the English translation in 2019 (Persephone Blues, Arrowsmith). Her fiction and poetry has won a number of awards in Ukraine. She holds a Ph.D. in Comparative Literature from the University of Georgia, and is currently a lecturer in Ukrainian Studies at the University of Texas at Austin, where she teaches the Ukrainian language and various Eastern European literatures in
translation. Her dissertation focused on the Polish writer Bruno Schulz, and Oksana spent a year in Poland as a Fulbright scholar. She translates from Ukrainian into English in collaboration with a New York-based poet and writer Olena Jennings. Their latest book-length translation, Artem
Chekh’s Absolute Zero, was published by Glagoslav Press in July 2020.

Uliana Hlynchak is a Toronto-based producer and journalist for KONTAKT TV, a Ukrainian weekly TV show. Uliana works with young talents on developing the show Kontakt Next Gen. She is a member of the Board of Directors at the Ukrainian Canadian Art Foundation. Volunteers for Ukrainian Toronto Festival.
In 1991, Uliana self-published in Toronto her poetry volume Alone, which received a favourable review from UofT professor Danylo Struk. In 1997 Uliana’s poems were included in the Greetings to Life volume of the young poets contest named after Bohdan-Ihor Antonych. Her poetry volume was also reviewed by Ivan Dziuba, prominent Ukrainian literary critic, academic of National Academy of Sciences of Ukraine, who wrote: “The poetry (volume) is unique, there is a poetic flair and a complex, unconventional inner world of the author. It seems that the author has a creative destiny, if only she does not hide into her inner self, but opens up to life and to herself.”
Uliana writes articles and blogs for local publications. She also writes and translates poetry and short stories in Ukrainian and English.
Her most recent projects are interviews on the contemporary art scene Art Talk and the webinar series Contemporary Ukrainian Émigré and Diaspora Literature.

Co-organizer bio:
Olga Khometa is a Ph.D. Candidate in the Department of Slavic Literatures and Languages at the University of Toronto, where she has been teaching language and literature courses for the past 5 years. Olga’s research focuses on the twentieth century Ukrainian and Russian poetry, modernism, late modernism, socialist realism, contemporary Ukrainian literature, theory of communicative act, ventriloquism, grotesque, and trauma theory. She is currently working on her dissertation entitled “Late Modernism in the USSR: Ukrainian and Russian Literatures in the 1928-38”. Olga gave her most recent public talk on Pavlo Tychyna’s Party Leads on invitation by NTSh in Canada. Olga earned both her Master’s and Bachelor’s degree with a major in Ukrainian Language and Literature at the National University of Kyiv-Mohyla Academy. She also completed the summer school in Ukrainian studies in the Harvard Ukrainian Summer Institute.
Olga is an active member of international academic community in Ukrainian studies. She regularly participates in major international conferences in Slavic studies in Canada and abroad such as ASEEES, ATSEEL, and CAS. She is currently a member of executive board of the Shevchenko Scientific Society of Canada and of Canadian Association of Ukrainian Studies. Olga also works with Krytyka journal, and organizes cultural events in Toronto. Olga does poetry translations between English and Ukrainian and writes her own poetry in both languages.