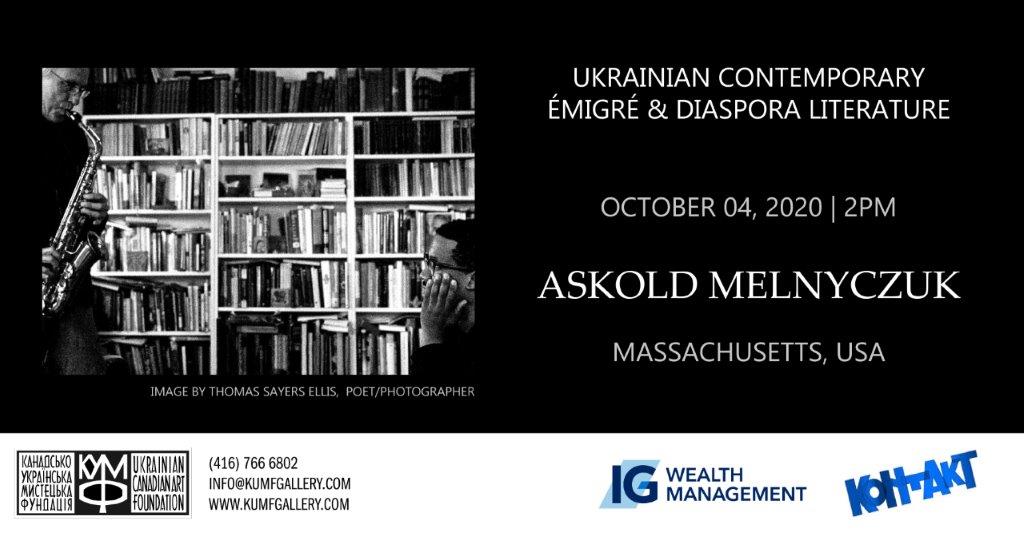 A public reading with Askold Melnyczuk, American writer and publisher.
Introduction by Olga Khometa, Ph.D. Candidate in the Department of Slavic Literatures and Languages at the University of Toronto. Please RSVP for this free webinar by Friday, October 2, 2020 by sending a request to info@kumfgallery.com with memo WEBINAR.

Авторські читання із Аскольдом Мельничуком, американським письменником та видавцем.Вступне слово – Ольга Хомета, докторант в ділянці славістики в університеті Торонто. Реєстрація на безкоштовний вебінар до 2 жовтня 2020 р. по імейл info@kumfgallery.com з позначкою WEBINAR.
——————
Author’s bio:Askold Melnyczuk’s book of stories, The Man Who Would Not Bow, will appear in 2021. He has published four novels which have variously been named a New York Times Notable, an LA Times Best Books of the Year, and an Editor’s Choice by the American Library Association’s Booklist. He is also co-editor of From Three World, an anthology of Ukrainian Writers. He has edited books on Father Daniel Berrigan and the painter Gerald Bergstein, as well as a series of poetry volumes published by Graywolf Press. His published translations include work by Oksana Zabuzhko, Marjana Savka, Bohdan Boychuk, and Ivan Drach. His shorter work, including essays, stories, and reviews, have appeared in The Threepenny Review, The New York Times, The Boston Globe, The Times Literary Supplement (London), The Antioch Review, Irish Pages, The American Poetry Review, The Missouri Review, Poetry, The Los Angeles Times, The Harvard Review and elsewhere. He’s received a three-year Lila Wallace-Readers’ Digest Award in Fiction, the McGinnis Award in Fiction, and the George Garret Award from AWP for his contributions to the literary community. As founding editor of Agni he received PEN’s Magid Award for creating “one of America’s, and the world’s, leading literary journals.” Founding editor of Arrowsmith Press, he has taught at Boston University, Harvard, Bennington College and currently teaches at the University of Massachusetts Boston.Co-organizer bioOlga Khometa is a Ph.D. Candidate in the Department of Slavic Literatures and Languages at the University of Toronto, where she has been teaching language and literature courses for the past 5 years. Olga’s research focuses on the twentieth century Ukrainian and Russian poetry, modernism, late modernism, socialist realism, contemporary Ukrainian literature, theory of communicative act, ventriloquism, grotesque, and trauma theory. She is currently working on her dissertation entitled “Late Modernism in the USSR: Ukrainian and Russian Literatures in the 1928-38”. Olga gave her most recent public talk on Pavlo Tychyna’s Party Leads on invitation by NTSh in Canada. Olga earned both her Master’s and Bachelor’s degree with a major in Ukrainian Language and Literature at the National University of Kyiv-Mohyla Academy. She also completed the summer school in Ukrainian studies in the Harvard Ukrainian Summer Institute.
Olga is an active member of international academic community in Ukrainian studies. She regularly participates in major international conferences in Slavic studies in Canada and abroad such as ASEEES, ATSEEL, and CAS. She is currently a member of executive board of the Shevchenko Scientific Society of Canada and of Canadian Association of Ukrainian Studies. Olga also works with Krytyka journal, and organizes cultural events in Toronto.
Olga does poetry translations between English and Ukrainian and writes her own poetry in both languages.