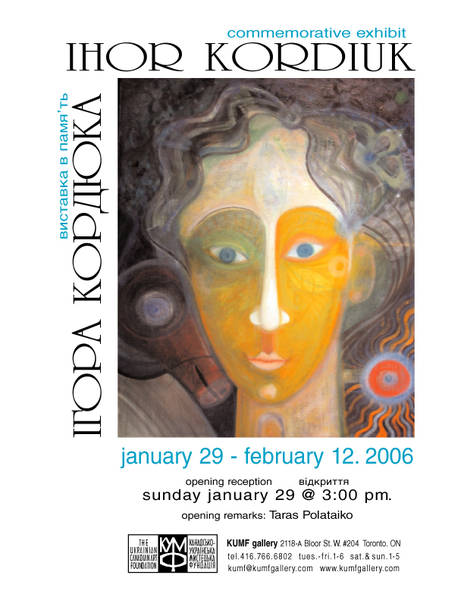 The unique Ukrainian artist, Ihor Kordiuk, moved to Canada from Munich, Germany in 1975. In that year, the art patrons Mykhajlo and Yaroslawa Szafraniuk were realizing their dream of establishing The Ukrainian Canadian Art Foundation (KUMF), whose initial location was at 2395 Bloor Street West. Auspiciously, the first solo exhibition of an artist organized by the new foundation in 1976 was that of Ihor Kordiuk. The exhibition introduced Toronto’s Ukrainian community to the young artist and to his original paintings and drawings steeped in mysticism. Influences apparent in his artwork stemmed from early cultures in ancient Ukraine and European avant-garde art movements. On the 30th anniversary of this exhibition, KUMF will again present the work of this artist, whose original exhibition was the first of many at the foundation that have enriched the cultural life of Toronto’s Ukrainian community to this day.

Sadly, Ihor Kordiuk passed away prematurely at the age of 58 in October 2004, leaving behind the fruits of 30 years of creative work in Canada and a collection of earlier work still in Munich. The retrospective nature of the current exhibition will permit a wider display of the artist’s creative range than was possible in 1976.

From the artist’s biography, it is interesting to note that he began hisartistic studies in Munich at the studio of the renowned sculptor Gregor Kruk. He continued his studies at the Chelsea School of Art in London and the Art Academy in Munich. In 1972, he visited the U. S. and worked in the studio of Jurij Solovij. Kordiuk began exhibiting his paintings in the late 60’s in Munich. In 1971 he was accepted to the Salon International de I’Art Libre in Paris. After arriving in Canada, he began to have shows in commercial galleries such as Bau-Xi Gallery, Bellair Gallery and Madison Gallery. However, Ihor’s bohemian nature drew him to also exhibit at alternative galleries and with artists’ collectives. He worked out of his warehouse studio in the Liberty Village neighbourhood of Toronto where many artists have their studios.

At the exhibition opening on Sunday, January 29th, 2006 at 3 p.m., artist Taras Polataiko will deliver remarks about Ihor Kordiuk, with whom he had a close association. Polataiko’s achievements in the international art world have made his name familiar to art lovers. In 2002, he represented Ukraine at the XXV Bienal de Sao Paulo in Brazil.

The retrospective exhibition of Ihor Kordiuk’s art will be on display at the KUMF Gallery, 2118-A Bloor Street West, from January 29th to February 12th, 2006.