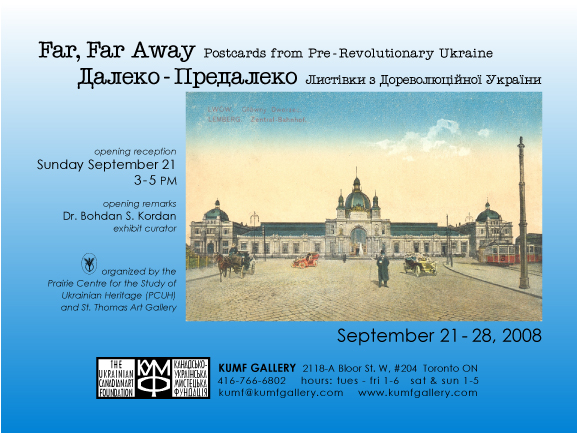 At the end of the nineteenth century the attraction of the picture postcard followed, after a fashion, the growing appetite for travel. Every corner of the globe was within reach and Ukraine was no exception. The allure of Ukraine, however, was limited. It was unknown and its relative isolation made it an unlikely destination for the traveler. Nevertheless, for the adventurous the rewards were great. There they encountered a landscape full of contrasts and mystery; a land rich in cultural diversity. Much of it, of course, is no more. But there are reminders; not least of which are the vistas and scenes captured in the postcard, printed initially in the thousands but of which only the odd few remain today.

Far, Far Away, an exhibition of one hundred and thirty four postcards of Ukraine