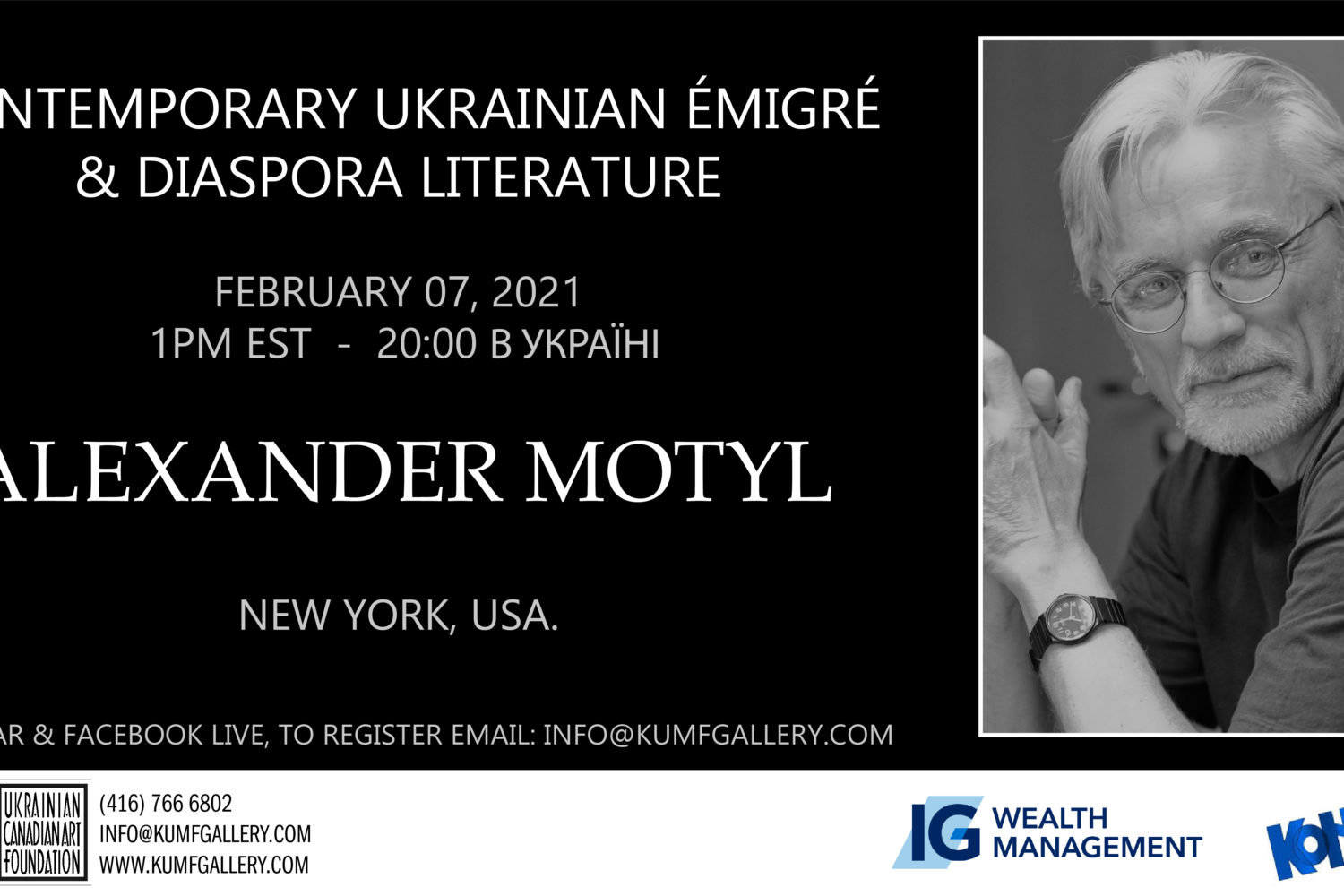 A public reading with Dr. Alexander Motyl, American Ukrainian writer.Introduction by Olga Khometa, Ph.D. Candidate in the Department of Slavic Literatures and Languages at the University of Toronto. Webinar registration at info@kumfgallery.com

Author’s bio: Alexander J. Motyl (b. 1953, New York) is a writer, painter, and professor. Nominated for the Pushcart Prize in 2008 and 2013, he is the author of nine novels, Whiskey Priest, Who Killed Andrei Warhol, Flippancy, The Jew Who Was Ukrainian, My Orchidia, Sweet Snow, Fall River, Vovochka, and Ardor. Vanishing Points is his first collection of poetry. Worries, his second poetry collection, is slated to appear in 2021. He has done performances of his fiction at the Cornelia Street Café and the Bowery Poetry Club in New York City. His artwork has been shown in solo and group shows in New York, Philadelphia, Westport, and Toronto and is part of the permanent collection of the Ukrainian Museum in New York and the Ukrainian Cultural Centre in Winnipeg. He teaches political science at Rutgers University-Newark and is the author of seven academic books and numerous articles.

Co-organizer and introduction by
Olga Khometa is a Ph.D. Candidate in the Department of Slavic Literatures and Languages at the University of Toronto, where she has been teaching language and literature courses for the past 5 years. Olga’s research focuses on the twentieth century Ukrainian and Russian poetry, modernism, late modernism, socialist realism, contemporary Ukrainian literature, theory of communicative act, ventriloquism, grotesque, and trauma theory. She is currently working on her dissertation entitled “Late Modernism in the USSR: Ukrainian and Russian Literatures in the 1928-38”. Olga gave her most recent public talk on Pavlo Tychyna’s Party Leads on invitation by NTSh in Canada. Olga earned both her Master’s and Bachelor’s degree with a major in Ukrainian Language and Literature at the National University of Kyiv-Mohyla Academy. She also completed the summer school in Ukrainian studies in the Harvard Ukrainian Summer Institute.
Olga is an active member of international academic community in Ukrainian studies. She regularly participates in major international conferences in Slavic studies in Canada and abroad such as ASEEES, ATSEEL, and CAS. She is currently a member of executive board of the Shevchenko Scientific Society of Canada and of Canadian Association of Ukrainian Studies. Olga also works with Krytyka journal, and organizes cultural events in Toronto.
Olga does poetry translations between English and Ukrainian and writes her own poetry in both languages.