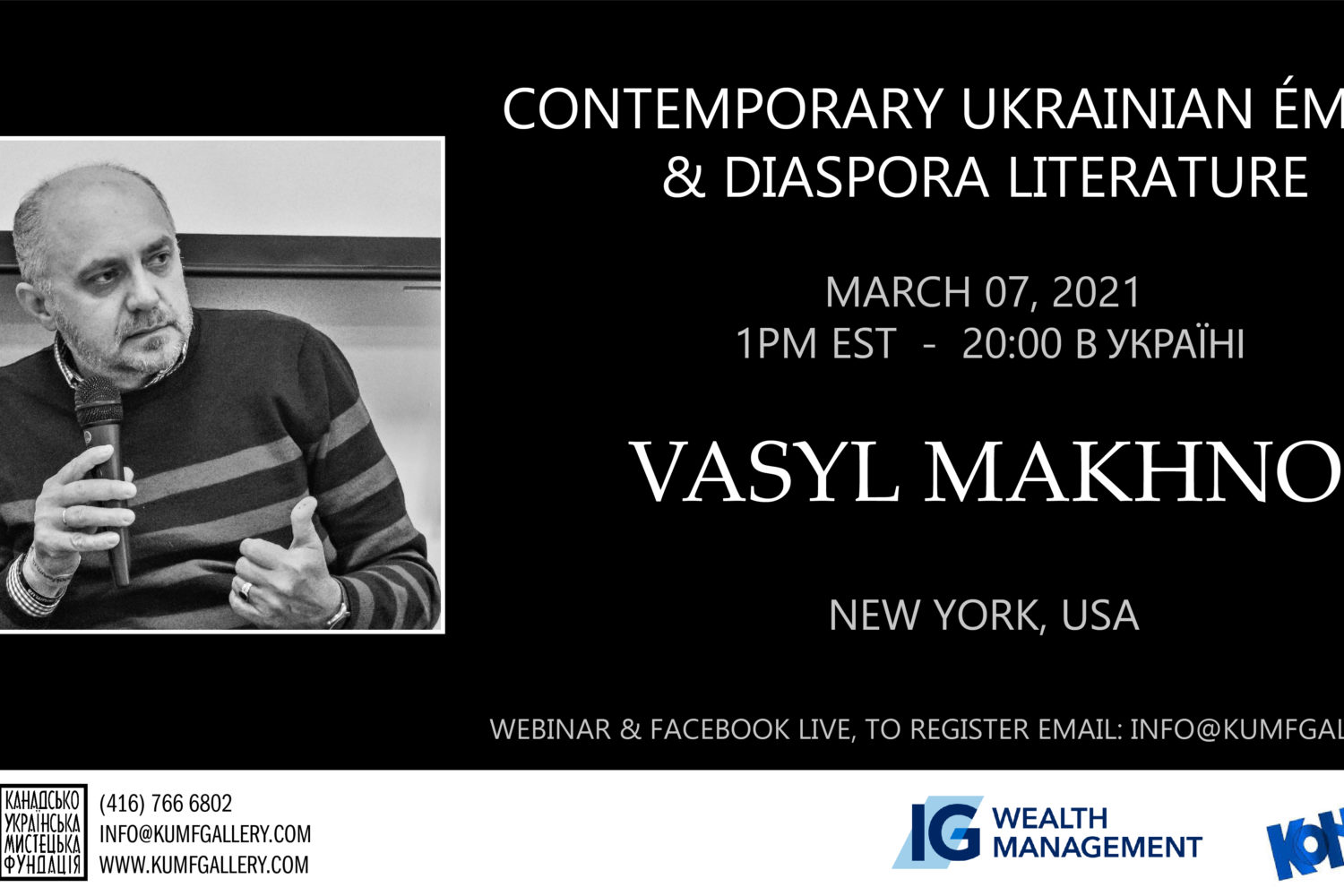 A public reading with Vasyl Makhno, Ukrainian writer.
Introduction by Olga Khometa, Ph.D. Candidate in the Department of Slavic Literatures and Languages at the University of Toronto.

Author’s bio: Vasyl Makhno is a Ukrainian poet, prose writer, essayist, and translator. He is the author of thirteen collections of poetry and most recently the book of selected poems Poet, the Ocean, and Fish (Folio, 2019). He has also published a book of short stories, The House in Baiting Hollow (Vydavnytstvo Staroho Leva: 2015), a novel, The Eternal Calendar (Vydavnytstvo Staroho Leva: 2019), and four books of essays, The Gertrude Stein Memorial Cultural and Recreation Park (Krytyka, 2006), Horn of Plenty (Krytyka, 2011), Suburbs and Borderland (Yakaboo Publishing, 2019), and Biking along the Ocean (Yakaboo Publishing, 2020). Makhno’s works have been widely translated into many languages; his books have been published in Germany, Israel, Poland, Romania, Serbia and the USA. His poems and essays appeared in English in Absinthe, Agni, Consequences, Post Road, Poetry International, and others. Two poetry collections, Thread and Other New York Poems (Spuyten Duyvil, 2009) and Winter Letters (Spuyten Duyvil, 2011), were published in English translation. He is the recipient of Kovaliv Fund Prize (2008), Serbia’s International Povele Morave Prize in Poetry (2013), the BBC Book of the Year Award (2015), and International Ukrainian-Jewish Literary Prize “Encounter” (2020). Makhno currently lives with his family in New York City.Co-organizer and introduction by
Olga Khometa is a Ph.D. Candidate in the Department of Slavic Literatures and Languages at the University of Toronto, where she has been teaching language and literature courses for the past 5 years. Olga’s research focuses on the twentieth century Ukrainian and Russian poetry, modernism, late modernism, socialist realism, contemporary Ukrainian literature, theory of communicative act, ventriloquism, grotesque, and trauma theory. She is currently working on her dissertation entitled “Late Modernism in the USSR: Ukrainian and Russian Literatures in the 1928-38”. Olga gave her most recent public talk on Pavlo Tychyna’s Party Leads on invitation by NTSh in Canada. Olga earned both her Master’s and Bachelor’s degree with a major in Ukrainian Language and Literature at the National University of Kyiv-Mohyla Academy. She also completed the summer school in Ukrainian studies in the Harvard Ukrainian Summer Institute.
Olga is an active member of international academic community in Ukrainian studies. She regularly participates in major international conferences in Slavic studies in Canada and abroad such as ASEEES, ATSEEL, and CAS. She is currently a member of executive board of the Shevchenko Scientific Society of Canada and of Canadian Association of Ukrainian Studies. Olga also works with Krytyka journal, and organizes cultural events in Toronto.
Olga does poetry translations between English and Ukrainian and writes her own poetry in both languages.