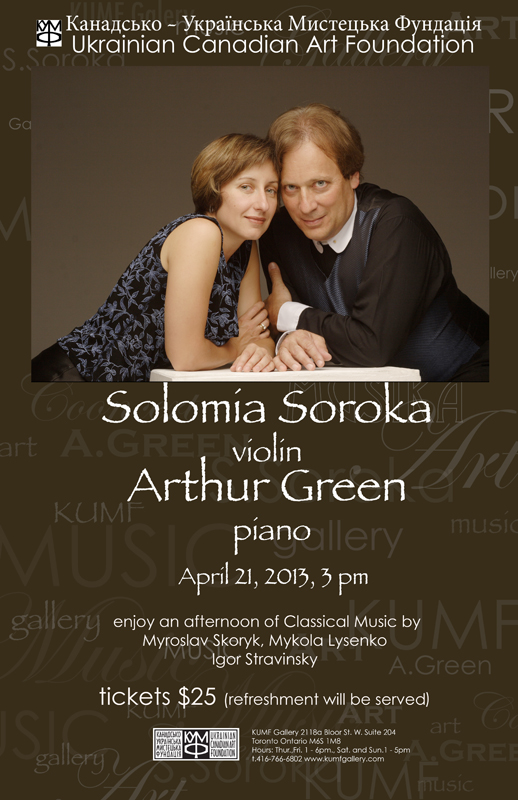 Solomia Soroka made her solo debut at age 10, playing the Mendelssohn Violin Concerto with the L’viv Philharmonic Orchestra, and has since appeared as soloist with that orchestra on numerous occasions. She has performed with the National Symphony of Ukraine and other orchestras in Ukraine, Australia, and the United States. ”The violinist Solomia Soroka played Concerto #5 in A Minor by Henry Vieuxtemps… The audience seemed hypnotized by the musician who performed the difficult piece with intensity and beauty. I was so in awe, I had to remind myself to breathe…” (Venice Gondolier, Florida).

Ms.Soroka has appeared as soloist and as chamber musician at concerts and festivals in Australia, New Zealand, Germany, France, Italy, Czech Republic, Ukraine, USA, Canada, China, and Taiwan. She is praised for being “a truly wonderful musician” (The Press, Christchurch, New Zealand), her “technical mastery…ferocity, light and mystic lyricism” (Daily Freeman, New York), and as one who “plays with great warmth and authority” (BBC Music Magazine). Ms. Soroka performed premieres of a number of important contemporary Ukrainian compositions for violin, including works by Borys Lyatoshynsky, Myroslav Skoryk and Yevhen Stankovytch.

Since her U.S. debut in 1997, she has performed throughout the United States. Her recitals in Washington DC were part of the Smithsonian Institute performing arts series and she received the following review in the Washington Post: “Soroka is a superbly equipped violinist, at ease with the technical challenges of Sarasate or of Jeno Hubay’s Czardas No. 2, but even more impressive in the gentler moments…. Her tone is warm and mellow on the low strings, brilliant on the high strings, perfectly controlled and expressively used.”

Solomia Soroka has toured and recorded extensively with her husband, the American pianist Arthur Greene. Their Naxos recording of Four Violin Sonatas by William Bolcom was selected as a Recording of the Month with the highest ranking for both artistry and sound quality by Classics Today, and received positive reviews in various journals: “Another virtuoso piece…confidently delivered by this brilliant duo” (Gramophone)

And their recording of the violin sonatas of Nikolai Roslavets, also for Naxos, has received international attention. “Soroka seemed utterly confident, catching a haunting, languid quality within Roslavets’s elusive harmonic idiom……” (The Strad)

In the past two years Soroka has been recording for Toccata Records, based in London. Her two premier recordings, the violin/piano music by forgotten American violinist Arthur Hartmann, and the music by Holocaust composer Leone Sinigaglia were released in 2009 and 2010 respectively. “ Soroka displays elegance and refinement in the Debussy transcriptions […] and elsewhere digs in with abandon and force.“ (MusicWeb International). Solomia Soroka is currently a violin professor at Goshen College, Indiana. She studied with Hersh Heifetz, Bohodar Kotorovych, Liudmyla Zvirko and Charles Castleman.

Arthur Greene “A profound musician” – The Washington Post; “A masterful pianist” – The New York Times; “Intoxicating appeal” – Mainichi Daily News, Japan; “A romantic splendor of sound-colors” – Ruhr Nachrichten; “Stellar Scriabinist” American Record Guide: these are a few of the press accolades Arthur Greene has garnered. Mr. Greene’s dynamic and personal performances have won him acclaim in concert halls and competitions throughout the world. He has won the Gold Medals in the William Kapell and Gina Bachauer International Piano Competitions.

Arthur Greene has performed the complete solo piano works of Johannes Brahms in a series of six programs at the Isabella Stewart Gardner Museum in Boston. He has performed the 10 Sonata Cycle of Alexander Scriabin in Sofia, Kiev, Salt Lake City, and other venues. His recording of these 10 Sonatas will be released in 2012. He has recorded the Complete Etudes of Scriabin for Supraphon. He has recorded the Violin-Piano Sonatas of William Bolcom and Nikolai Roslavets on two discs for Naxos, and the Violin-Piano music of Myroslav Skoryk, with his wife, the violinist Solomia Soroka. Mr. Greene received degrees from Yale University and Juilliard, and studied with Martin Canin. He is the Professor of Piano at the University of Michigan in Ann Arbor.