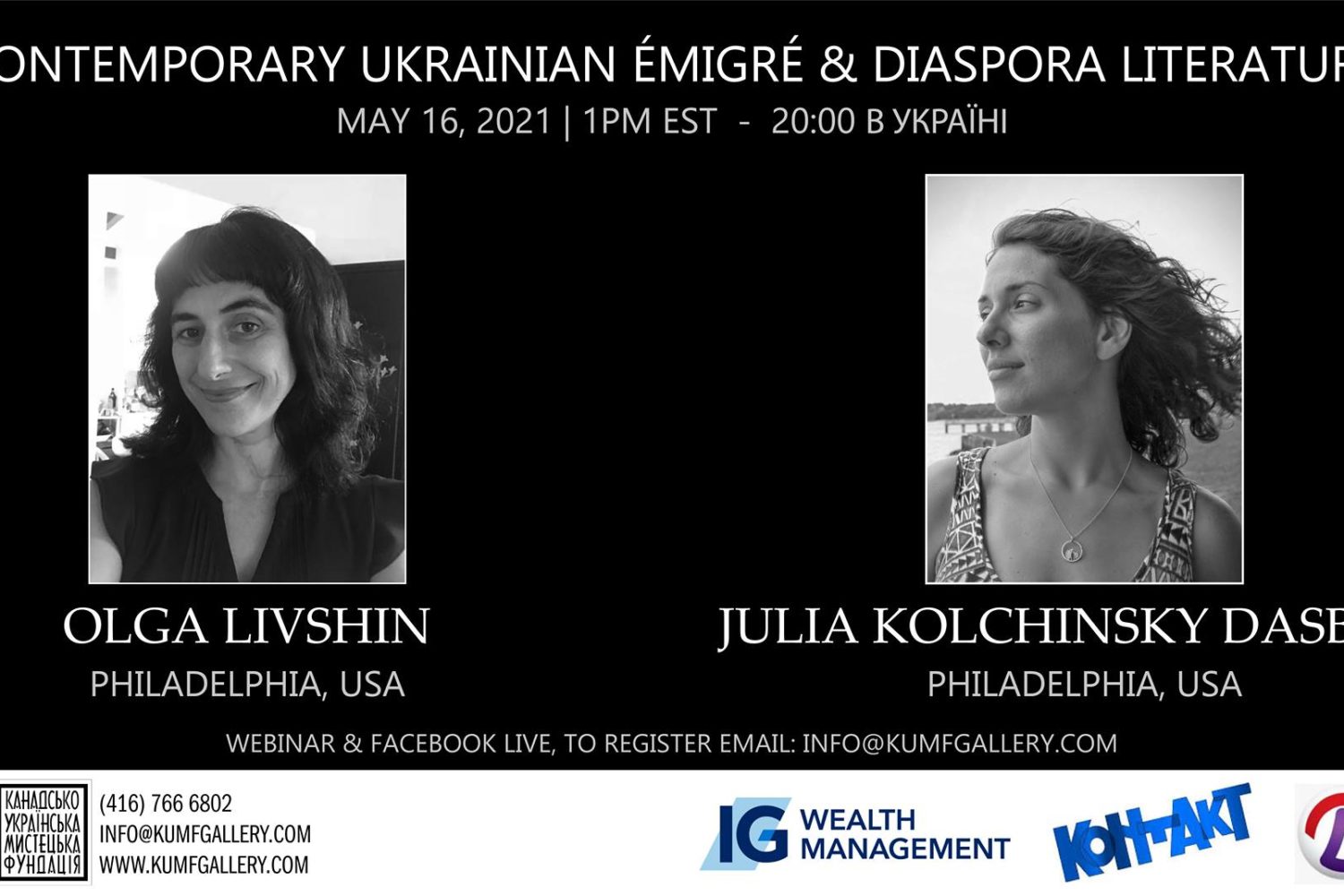 A public poetry reading with Julia Kolchinsky Dasbach and Olga Livshyn. Introduction by Olga Khometa, Ph.D. Candidate in the Department of Slavic Literatures and Languages at the University of Toronto. Webinar registration at info@kumfgallery.com

Authors bio: Julia Kolchinsky Dasbach emigrated from Ukraine as a Jewish refugee when she was six years old. She is the author of three poetry collections: The Many Names for Mother, winner the Wick Poetry Prize (Kent State University Press, 2019), finalist for the Jewish Book Award; Don’t Touch the Bones (Lost Horse Press, 2020), winner of the 2019 Idaho Poetry Prize; and 40 WEEKS, forthcoming from YesYes Books in 2022. Her recent poems appear in POETRY, Blackbird, American Poetry Review, and The Nation, among others. She holds an MFA from the University of Oregon and just defended her Ph.D. in Comparative Literature & Literary Theory at the University of Pennsylvania. She lives in Philly with her two kids, two cats, one dog, and one husband.

Olga Livshin is a poet who translates Russian-language poets living in Russia, Ukraine, and the United States. Her work appears in Modern Poetry in Translation, Poetry International, Kenyon Review, and The Common, among other journals. A Life Replaced: Poems and Translations from Anna Akhmatova and Vladimir Gandelsman was published by Poets & Traitors Press in 2019. She lives outside Philadelphia and teaches children creative writing.

Introduction, organizer: Olga Khometa is a Ph.D. Candidate in the Department of Slavic Literatures and Languages at the University of Toronto, where she has been teaching language and literature courses for the past 5 years. Olga’s research focuses on the twentieth century Ukrainian and Russian poetry, modernism, late modernism, socialist realism, contemporary Ukrainian literature, theory of communicative act, ventriloquism, grotesque, and trauma theory. She is currently working on her dissertation entitled “Late Modernism in the USSR: Ukrainian and Russian Literatures in the 1928-38”. Olga gave her most recent public talk on Pavlo Tychyna’s Party Leads on invitation by NTSh in Canada. Olga earned both her Master’s and Bachelor’s degree with a major in Ukrainian Language and Literature at the National University of Kyiv-Mohyla Academy. She also completed the summer school in Ukrainian studies in the Harvard Ukrainian Summer Institute.
Olga is an active member of international academic community in Ukrainian studies. She regularly participates in major international conferences in Slavic studies in Canada and abroad such as ASEEES, ATSEEL, and CAS. She is currently a member of executive board of the Shevchenko Scientific Society of Canada and of Canadian Association of Ukrainian Studies. Olga also works with Krytyka journal, and organizes cultural events in Toronto.
Olga does poetry translations between English and Ukrainian and writes her own poetry in both languages.