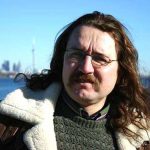 Oleh Valenyuk was born in Doluna, Ivano-Frankivsk, Ukraine in 1964. From 1979 to 1983 he studied at the Uzhhorod College of Applied and Decorative Arts and at the Lviv Academy of Applied and Decorative Arts, ceramic department, from 1987 to 1993. From 1995 – 2000 he was a member of the Ukrainian Union of Artists and worked in the painting, graphics and ceramic departments. As a member of the Ukrainian International Exhibitions, Oleh Valenyuk has participated in exhibits in Britain, Spain, Norway, Poland, Sweden, Japan, Bulgaria, France and Canada.

He came to Canada in 2000, and has been working as a designer and painter. His murals can be found at the Golden Lion Restaurant and King’s Garden Banquet Hall, the Ukrainian National Organization building and St. Mary’s Church. He is member of the Ukrainian Association of Visual Artists of Canada.