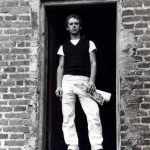 Ihor Kordiuk’s works can be found in private collections in Canada, U.S. and Europe.

Honesty does not seem to enjoy popularity in contemporary art. The market bombards us with an array of products based on cerebral trickery rather than sincerity. The artists are buying into the niches craftily prefabricated for them by the art industry, and “why not”? After all, it is all easily justifiable by any of the ready-made “post-modern” theories. Welcome to the comfortable New World of conformity where the artist integrity, except for the notion’s nominal usage of course, does not amount to more than an old-fashioned sentiment. In this world, the artist’s position is not as important as the final product. After all, it is the product that the market sells, and as long as it does sell, the position can be easily adjusted.

Only on the fringes of that suffocating environment can one meet an artist whose life and work have not been groomed by the industry. This kind of artist should be regarded as a dying species. Ihor Kordiuk is one of them. His work was never affected by the constantly changing whims and fashions of the art world. He refuses to “adjust”. His is a kind of work which has to be appreciated along with an understanding of the person behind the canvas. It is impossible to separate his life from his work. A lebenskunstler?.

What we see is layers upon layers of memories, presented with a rare degree of, sincerity. Perhaps, it is this sincerity of Kordiuk’s pieces which always makes one feel better when one sees them.

In a way, his work is a record of his life, a personal mythology. In a way, he is a historian of the mood, and the mood (Grundstimmung) determines history.
Taras Polataiko, 1998