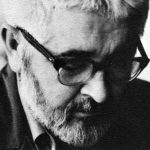 Jacques Hnizdovsky was born in Ukraine in 1915 and studied art in Warsaw and Zagreb. He had an early interest in the woodcut, particularly those of D?nd the Japanese.

Shortly after he arrived in the United States in 1949, A. Hyatt Mayor of the Metropolitan Museum of Art chose one of his woodcuts for a Purchase Award at a 1950 Minneapolis Institute of Art print exhibition. It was a turning point in his career and his life. From that moment he was determined to make his livelihood as an artist.

By the end of the 1950s he had settled into the woodcut as his primary medium. In 1962 he was awarded First Prize at the Boston Printmakers annual exhibition. He was invited to participate in the Contemporary U.S. Graphic Arts exhibition which traveled to the USSR in 1963, as well as a similar exhibition to Japan in 1967. His woodcuts were included in the Triennale Internazionale della Xilographica in Italy in 1972. In 1977 shows of his woodcuts were held at the Long Beach Art Museum, California, and Yale University, and in 1978 and 1982 at the University of Virginia and at the Hermitage Museum of Norfolk, Virginia, in 1981.