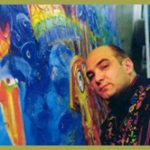 A Laughing Master from the East.

Roman Zuzuk’s paintings please people, but not with beauty. His paintings are like old friends, we do not care whether their looks are perfect, but we love listening to them talking. In fact, Zuzuk is not at all involved in the creation of beauty as an end in itself. Basic to his art is the need to communicate directly with the viewer. His pictures tell stories. Some of them are comic, others eccentric or lyrical, but they always come from our own lives and listening to them makes us feeling better.

The works of Roman Zuzuk have multiple sources of inspiration. His art brings together everyday and extraordinary, rural and urban, past and present, reality and fantasy. The final result is not an eclectic maze, but a balanced artistic vision focused on men – those funny creatures with their strange upbringing, prejudices, feelings and dreams.

Roman Zuzuk’s works have naive overtones in them: his use of bold colours, disturbed proportions and other anti-naturalistic effects bring out the child in us all. It is indeed Zuzuk’s background and especially his memories of childhood that exert strong influence on his style. He was born in the small Ukrainian village of Selec in a household poor in material things. Yet, the rural life style of his community endowed him with sensitivity and sense of humour that cannot be raised in other conditions. At a young age, he started drawing from nature: his first models were cows at pasture, hens in the backyard, flocks of geese flying overhead. But like most modem masters, Zuzuk arrived at primitivist abstraction only through a rigorous classical training. He graduated from the prestigious Kyiv Academy of Fine Arts, where he mastered a sophisticated painting technique.

In the early nineties, Roman Zuzuk moved to Prague as an already accomplished painter. To the booming Czech capital, he brought his boldly coloured and refreshingly direct paintings with laughable figures that talk to the viewer in their outlandish language. Numerous exhibitions followed in galleries around Europe and Zuzuk’s works attracted collectors from the whole world.

What is so appealing about Zuzuks’s paintings? Perhaps it is the mixture of religious symbolism with a pagan interest in animals and monsters. Through his mirroring of human and bestial forms Zuzuk satirises human pretensions to refinement and draws attention to the topsy-turvy nature of destiny. His paintings tell modern fables which are not didactic, but rather open to individual interpretation.

Other striking feature of Zuzuk’s art is the expressive way he deals with place and time. Both dimensions are in us: and he means it literally. Many of his figures have landscapes painted in their bodies or they literally bear with them memories of places where they have been (take for example his ‘Emigrant’) and dreams of future destinations. Time is captured most directly in the figures full of watches, but it is also present in the fluids of fish, birds or other animals.

Perhaps the most delightful aspect of Zuzuk’s art is the vibrant sense of real life that it creates. In Zuzuk’s paintings, people laugh, drink, argue, play music. With a wry, yet sympathetic humour, the artist celebrates our paradoxical life and in the same time satirises the folly inherent to human nature.
Veselin Vackov