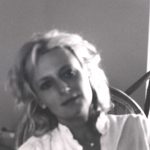 Traveling through New Mexico and Arizona, I became fascinated with the landscapes, pueblos and canyons, as well as the history of the American Native Indian culture.

Through the media of printmaking, I created a series of etchings, notably monoprints that depict aspects of Native Indian life such as ?The Shaman?, the power of Totem, the spirit of eagles and the incredible structure of pueblos, canyons and desert.

The etchings, particularly the monoprints, are a combination of assemblages, individually etched and sculptural in nature; of heavily embossed plates, some printed without ink to indicate purity and spirituality.

The series of watercolours depict aspects of fruit, such as the sensuality of pears, of people I?ve seen, of pueblos and ordinary objects such as the ?Chair?. These works were painted with watercolours and accented with oil pastels.

In more recent works, such as my oil paintings, I further explored aspects of objects, people and children, such as ?Masquerade? in a more ethereal manner ? the application of gold leaf was used to produce a shimmering, jewel-like effect and illuminates the various compositions.