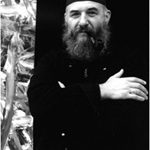 Vasyl Bazhay, born in Lviv in 1950, defined his artistic style in the late 1980s when the reins of government censorship loosened and painting provided him a venue for a furious offensive against the system. A painter and installation artist, Bazhay began his work in Lviv?s theaters, an experience which freed him from the natural fear of space and liberated his thought process and selection of color.

In the 1980s, when the reins of censorship loosened (the Bolsheviks were persecuting open dissidents but had no energy to look for the “hidden” ones, the “furious youth went on offensive.” I have been gladly following the play of lights at the exhibitions of young artists and have patiently waited for the coming of a master of the highest rank, who was sure to appear in the upsurge of Ukrainian creative activity. Last year, at his personal exhibition in Kyiv, I discovered Vasyl Bazhay. His large canvases emanated a mighty, gloomy force. His object-less compositions bore the stamp of geological or psychological shifts, struggles and strains. Like hardened lava, the fragments of pictorial forms seem to be thrown upon the canvas after melting in fire and then hardening in sullen rage into cold immobility.
Dmytro Horbachov, Kyiv, Ukraine

For some time after graduating from the Institute, Vasyl Bazhay worked in one of Lviv’s theaters. This experience freed him from the natural fear of space, liberated his plastic thought, his artistic selection of palette. This experience was decisive in the realization of a new exhibition. The artist built it as an entirety, like a theatrical performance that takes place not only in the three dimensions of space, but also in time. Its dramatic conflict was inherent in the material itself-in the selection and disposition of the exhibits. The mighty artistic temperament sounded in the lower registers of the large canvases, on which monumental architecture continued, developed and concentrated on the intense dynamics of the main movement-struggle. On the other hand, the most subtle nuances of color sounded in diminutive form. Here a single stroke of the brush acquired utmost significance. The artist’s gift of composition was already evident in the exposition and was fully realized in the specific arrangement of each work.
Olena Ripko, Lviv, Ukraine