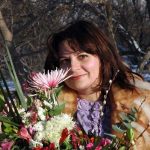 Natalia Valenyuk was born in 1967 in Lviv, Ukraine and studied at the Lviv Academy of Applied Arts (Textile Department) from 1986 to 1982. She has taken part in local and international textile exhibitions since 1985. She works primarily in textile, batik, painting and floral design.