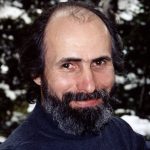 Viktor Tsapko was born in 1956 in the Kherson region of Ukraine. He graduated with honours from the M.B. Hrekov Art College in Odessa, Ukraine in 1983 and lived in St. Petersburg, Russia from 1985-1988. Viktor specializes in painting and graphic art and currently resides in Toronto.
Viktor Tsapko’s works can be found in private collections in Ukraine, Russia, England, Germany, Australia, Japan, U.S.A. and Canada.