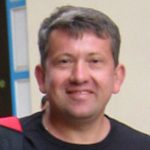 Taras Boychuk was born in Ukraine, in 2004 he moved to Canada. His main media is oil painting. He began his art career in 1982 during study architecture in Lviv Polytechnic University in Ukraine. In September 1992 he exhibited in Ukrainian Art & Literary Club in New York. Boychuk’s pictures are mainly inspired by the Carpathian mountains, Crimean and Caribbean seascapes.