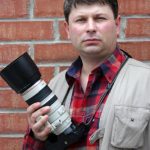 Volodymyr Svizhovych was born in Lviv in 1971. He graduated from the Lviv Polytechnic Institute as a chemical engineer. He was one of the founders
of ” the Student’s brotherhood “. The participant of student’s starvation of 1990 on Majdan Independence in Kiev.

In 1992 has based publishing house “The Word and Commerce “, in which many various Ukrainian books were published.

Since 1999 has taken a great interest in a photo. He uses own photos at the edition of calendars, post cards and books.

In 2001 publishes author’s work – the guidebook “The Window to Lviv “.

Since 2002 – in Canada. The photo prints in Canadian-Ukrainian newspapers and magazines: “Female Light”, “Real estate”, etc. Ukrainian calendar publishes yearly. At present has a greater collection of photos about Ukraine. He is founder of firm “Photo Ukraine Corp.” and owner website www.photoukrainesource.com