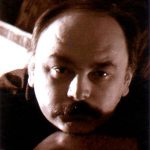 “Everything that takes place in the works of an artist has happened to him in his childhood”.

Roman Romanyshyn has received international recognition for his graphic art.

The Museum of Contemporary Art in Geneva, Switzerland purchased three works from his solo exhibit at the Saint Leger Gallery in November, 1996. In December the Rigas- Vini Gallery bought all 22 works from the solo exhibit in Riga and brought them to the Art Fair in New York in 1997. The gallery showcased the Ukrainian artist at the Milan Art Fair in 1996. In 1996 the French Cultural Centre in Kyiv hosted a solo exhibit of Romanyshyn’s forty prints inspired by French writers. His work was on display at the Geneva International Art Fair in May. In September a solo exhibit opened in Lviv.

Born in 1957 in Western Ukraine, Romanyshyn graduated from the Lviv Institute of Applied and Decorative Arts in 1984. He has participated in 30 international print exhibitions in 15 countries and has had 12 solo exhibitions. Romanyshyn received awards at international print exhibits in the United States, Spain, and Korea. The Soros Centre of Contemporary Art in Kyiv published a catalogue dedicated to his prints, paintings, and sculpture. His works express universal concerns about life, death, and eternity. At their best they transcend the familiar and commonplace into the realm of the metaphysical.

?I always loved to listen to and feel materials that were primitive and simple: stone, wood, bronze, the heavy spirit in the beauty of old painting, the ancient gessoed icons, the archaism of archaic ceramics. There is so much hidden in the material itself that it’s simply enough to listen attentively to its melody. When a potter is spinning a pot on a potter’s wheel, then, according to the theory of rel- ativity; and from the viewpoint of the pot itself, the whole world, including the potter; is spinning around it. The creative process is always built on mutual understanding and mutual respect between the artist and the material with which he is working?.