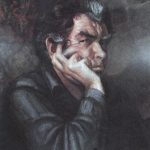 Born 21 August, 1937 in Smila. He studied at the Dnipropetrovske Art School and graduated from the Kiev State Art Institute in 1965. In the 1960s, together with A. Horska and V. Zaretsky, he created decorative murals for various restaurants and buildings in Kiev. Because of his unorthodox depictions and because he signed a political petition in 1968, he was denied membership in the Union of Artists. His murals at the Khreshchatyi Yar Caf鬠which depicted historical events and contemporary writers in a powerful, expressionistic manner were destroyed by the authorities in 1971. Plaskii survived by ghost-painting for officially recognized artists, painting portraits on commission and working in Siberia.

His oils are distinguished by a dark palette and tragic subject matter. Plaskii?s murals and many wood sculptures can be found at the Mykhailo Kostsiubynsky Memorial Museum in Chernihiv. Over half of his more than 1,000 works are in private collections.

The first exhibition of his works was held in Toronto in 1991.