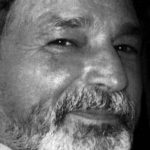 Volodymyr Makarenko, also known as Makar, graduated from the Dnipropetrovske Art School, 1963 and the Leningrad Institute of Applied Art, 1969, won first prize at the Biennale of Graphic Art in Ljubljana, Slovenia, 1975 and in a private apartment in Moscow, organizes the first Ukrainian nonconformist exhibition. In 1976 his first one-man exhibition was held at the Galerie Hardy in Paris. The subjects of his work are highly personal, as are his images and vocabulary, which often reflect his Ukrainian heritage as well as Ukrainian history and literature. Paintings include watercolours, oils and mixed media and have revealed his childhood dreams, nostalgia for his homeland, erotic fantasies and an interest in the metaphysical. Although Makarenko is not a narrative artist, some of his paintings are visual texts with multiple readings. Makarenko also paints still lifes and figural compositions, often on religious themes. He has successfully synthesized several disparate sources, including Kandinsky, Ukrainian icons, surrealism and abstract art into an unusual and unique vision. Since 1981 he has had numerous one-man shows in France, Germany, Switzerland and North America, including Chicago (1983) and Toronto (1982, 1983, 1991 and 2003).
Encyclopedia of Ukraine (Toronto, 1993)

Volodymyr Makarenko was born in 1943 in the Dnipropetrovsk region of Ukraine, and graduated from the Dnipropetrovske Art School in 1963. He continued his studies in Leningrad at the Mukhin Institute of Applied Art, from which he graduated in 1969. Soon after, Makarenko gained special acclaim in a private exhibit organized by the group of non conformist artists in Moscow. In 1975 he won first prize at the 11th Biennale of Graphic Art in Ljubljana, Slovenia. Due to his involvement with the non conformist movement Makarenko was made uncomfortable in Leningrad under the Soviet regime; he fled to Tallinn, Estonia and from there to Paris, France.

Makarenko had his first one-man exhibit at the Galerie Hardy in Paris in 1976. His exhibited works were subsequently published as a catalogue by the gallery (Vladimir Makarenko, Aquarelles-Exposition 29 Avril & 29 Mai, 1976, Paris: Galerie Hardy 1976). Since then Makarenko has regularly exhibited his works averaging one per year in France, Germany, Switzerland, Great Britain, Canada and America.

His works come in glowing colors – cardinal reds, golds and yellows creating ambiguous overtones of form and space. He achieves much of his effect by layering washes laid over flattened impasto in oil and sedimentary over washes in watercolour.

Makarenko is also dedicated to the female form. He is a master at injecting his own unique vision of the form ? real and surreal at the same time, together embracing the Renaissance and the twentieth century. As he stylizes the form, the flesh becomes shadowy and sensuous and the landscape eerily surrealistic. The effect, as in all Makarenko?s work is staggeringly beautiful.

When asked about non-conformism: “Currents arise” says Makarenko “into which many people both talented and untalented are drawn. A talented artist can curt himself off from the current and flow in his own stream I never want to stop.”