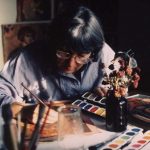 Christine Granger was born into the Chumak family in Lviv, Ukraine. She grew up in Toronto, the eldest of five children, in a Ukrainian family where icons were part of daily life at home and church. She studied at the Ontario College of Art and at the University of Ottawa (B.A., M.A.). Much of Christine’s professional life as art consultant and a teacher of art and English was spent in Ottawa. She and her husband, a retired law professor, gave up city life for a farm near Brennan’s Hill, a rural community just north of Wakefield along the Gatineau River in Quebec.

For almost thirty years Christine has been painting icons, and studying this ancient art. She does not copy ancient icons but rather creates original works in the spirit of the icon tradition. Her starting point is the Ukrainian and Byzantine icon tradition, and she sees her paintings as a joyful reaffirmation of the mystery of the incarnation. She has exhibited in the Ottawa area and in the US, and her icons can be found in many private and public collections, including the Canadian Museum of Civilization.

She uses a variety of media, including wax and egg tempera. Currently, she works with acrylic colors and gold in a layering technique to build up textures, patterns and borders. Her primary color palette includes reds, oranges, yellows and golds, colors usually associated with fire, light and the divine.
Granger states: “I have been painting icons for close to thirty years. If I had a good voice I would sing in a gospel choir and thus rejoice and share the good news of Christ our Lord. I work in color instead, bringing new techniques and ideas to a tradition as old as Christendom.”

Christine’s art was been marketed in several countries and published in two books inspiring meditation. In 1996, she produced a book entitled Mary: Mother of My Lord, which included 28 color reproductions of her icons. The book was published by Novalis Press in English and translated into French, Spanish and published in Italian by Biblioteca Vaticana. A second Novalis publication in 2006 entitled: Mother and Child contains a contemplative collection of Christine’s paintings and poetry selected by the artist. Her books include the inspirational words from such spiritual sources as Mother Teresa of Calcutta, poet Rainer Maria Rilke and archbishop of Canterbury Rowan Williams, and Taras Shevchenko

PUBLISHED, PRINTED & EXHIBITED
Christine Granger’s Icons are in private and community collections
She is internationally acclaimed, and her icons can be found in many public and private collections, to name a few:
The Canadian Museum of Civilization – Ottawa/Hull, Canada
Lieutenant-Governor of Quebec – The Honourable Lise Thibault (retired)
The Archbishop of Ottawa – Marcel Gervais
The Chapel at La Pieta – Hull, Quebec

Publications, Newspaper Reviews and Television:
Christine Granger’s Icons have been printed and published in books, magazines, newspapers and covers for books /magazines. Novalis has published two of her books:
MARY MOTHER OF MY LORD (Art by Christine Granger) Published in English, Spanish, and French and marketed worldwide. Italian Version published by Vatican “Biblioteca Vaticana Rome”

The CTV – Ottawa television program the “Regional Contact” featured a story about Christine and her art in April 2008.