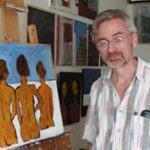 Born in New York City in 1953, Motyl studied painting with Leon Goldin at Columbia University. Motyl has exhibited in solo and group shows in New York City, Philadelphia, Cleveland, and Charlotte. He is represented by The Tori Collection; his work is on display at www.toricollection.com.

Tersely styled and quietly rendered, the evolving corpus of Motyl?s work hovers between cityscape, still life, and figures. Inspired by his reverence for the ordinary, Motyl?s most representational work projects the prosaic features of urban architecture. Personalized by the artist through a pictorial and symbolic focus, windows align the artist?s gaze with the viewer?s emotion. In his most recent work, Motyl presents a series of angular, elongated nudes, bottles, and legs braced against starkly simplified landscapes. Through the meditative beauty of such figures, he extends the mood of solitude and introspection of his earlier work.

Whiskey Priest is a Graham-Greene-esque ?entertainment? in which a relatively simple plot line serves as a vehicle for psychological examinations of the leading characters and their existential dilemmas. The plot centers on a KGB assassin working for the Russian mafia, the American professor he is pursuing, and the female US foreign service officer assigned to the case. The assassin is a devoted Communist whose world has collapsed with the collapse of the USSR and who can no longer find moral justification for the killings he still commits. The professor is a corrupt and cynical academic. The central character is an existentially, professionally, and emotionally insecure Ukrainian-American woman, Jane Sweet, who discovers who she is and what she is capable of in the course of her investigation.

Who Killed Andrei Warhol: The American Diary of a Soviet Journalist is an absurdist tragicomedy that proceeds from the unlikely coincidence of Andy Warhol?s having been a working-class boy of Rusyn-Ukrainian background from Pittsburgh and the fact that the Communist Party USA had its headquarters in the same building as Warhol?s Factory on Union Square. Written in the form of a diary, the novel imagines and explores the clash between two opposite worlds?that of Andy Warhol and that of a straight-laced orthodox Communist, a Soviet Ukrainian journalist who arrives in New York in early 1968 to cover the impending American Revolution. As the journalist, Sasha Ivanov, struggles to understand life in New York, he comes to believe that his fellow Ukrainian worker, ?Andrei? Warhol, is a socialist realist painter, a proletarian genius, and a passionate Leninist.

Motyl?s day job is Professor of Political Science and Deputy Director of the Division of Global Affairs at Rutgers University-Newark. He served as Associate Director of the Harriman Institute at Columbia University in 1992-1998. He is the author of six academic books, Imperial Ends: The Decline, Collapse, and Revival of Empires (2001); Revolutions, Nations, Empires: Conceptual Limits and Theoretical Possibilities (1999); Dilemmas of Independence: Ukraine after Totalitarianism (1993); Sovietology, Rationality, Nationality: Coming to Grips with Nationalism in the USSR (1990); Will the Non-Russians Rebel? State, Ethnicity, and Stability in the USSR (1987); and The Turn to the Right: The Ideological Origins and Development of Ukrainian Nationalism, 1919-1929 (1980). He is also editor of the 2-volume Encyclopedia of Nationalism (2000); Thinking Theoretically About Soviet Nationalities (1992); and The Post-Soviet Nations (1992).