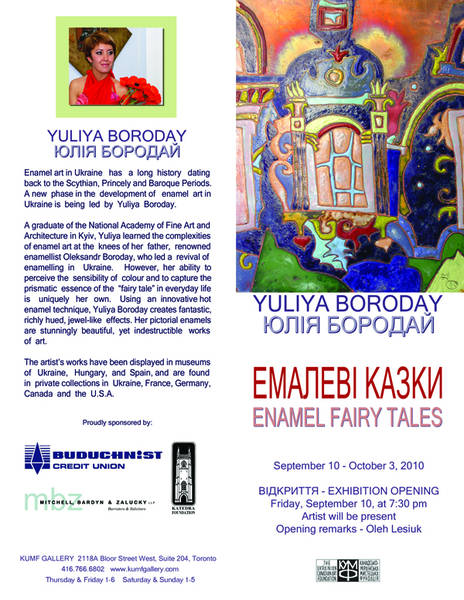 The author of these works, Yulia Boroday, is an artist from Ukraine. The watercolors and enamels, which art enthusiasts will see, represent an unusual joining of genres, each enhancing and enriching the other. Yulia Boroday is a docent in the Department of Drawing and Painting at the Kiev National University of Construction and Architecture. She holds the degree of Candidate in fine arts and is member of the Union of Artists of Ukraine and member of the Union of Advertisers. A graduate of the Kiev Art School and later of the National Academy of Art she organized and was curator of the International Festival of Enamel Artists, which took place for the first time in Kiev last year. Her solo exhibits as well as her participation in group exhibits were successful both in Ukraine and abroad.

Scholars trace the sources of enamel art in the East. There is a theory that from Byzantium it came to Kiev Rus’ and influenced the development of old Rus’ culture. Yet it is known that the Scythians used enamels in making jewelry and, depending on the level of their skills, one may deduce that the traditions of this technique developed earlier, on the territories of Old Rus’-Ukraine. Scholarship has yet to determine who influenced whom. Until the 19th century enamel art served usefully as decoration in jewelry, in ornamentation of weapons, of books, of church and home utensils, as well as in architecture. Later this technique was applied to non-utilitarian art. It is this non-utilitarian art that the artist displays before us now.

Her works attract by the richness of colors which at first may look chaotic. Her compositions are clearly planned, however, and the colors are combined in such a way that they clarify the composition and re-enforce one another. A part of the collection, especially the sculptural pyramidal shapes which visitors will see, was exhibited in the Museum of Enamel Art in Spain.

One of Yulia Boroday’s favorite objects are flowers. She can dedicate a whole show to them as, in the case of her Christmas Flowers, Lviv, 2006. She experiments with line, with form, with color, looking for perfect embodiment of the creations of nature. It’s not surprising that the first impression from her work is admiration of their beauty. Beauty was always considered the basis of European esthetics and it expressed goodness, truth, always purity and harmony. The ancient Greeks joined these ideals into the formula “kalos k’agathos” the beautiful and the good, which served as the esthetic model in the ancient world. Since a flower usually has eight petals and there are eight directions on the cosmic compass, in most eastern mythologies it is considered a symbol of cosmic harmony. In Ukrainian cosmogonist songs, in the myths of ancient peoples, the flower and the tree of life were the first to appear over the primordial waters of the oceans. It is not surprising then, that the flower holds such an important place in the Ukrainian art of ancient times, quite apart from its decorative functions.

One cannot agree, therefore with Som-Serdiukova who states that “almost till modern times the flower was relegated to the role of a silent witness of a certain scene, raising its artistic characteristics to the level of “nature morte” or still life. Modern art was capable to place the flower at the basis of style formation. In Ukrainian art, flowers acquired compositional and stylistic importance, still in the Baroque period, in iconography, frescoes, tapestries and utensils where they were not only important structural components of art works but determined the style, the characteristics and particularities of Ukrainian Baroque.

The works of Yulia Boroday harmoniously unite both the traditional and modern art trends. Good education, a positive family background, studies and travel as well as a deep appreciation of what she read and experienced, continue to give this artist the ability to transmit in watercolors and enamels the limitless beauty and transformation of the world, that cannot be expressed in words.